Limited Time Offer: Free Shipping on all orders to India! A series on the child form (Bala Rupa) of the Divine Feminine, done during Navaratri 2020. 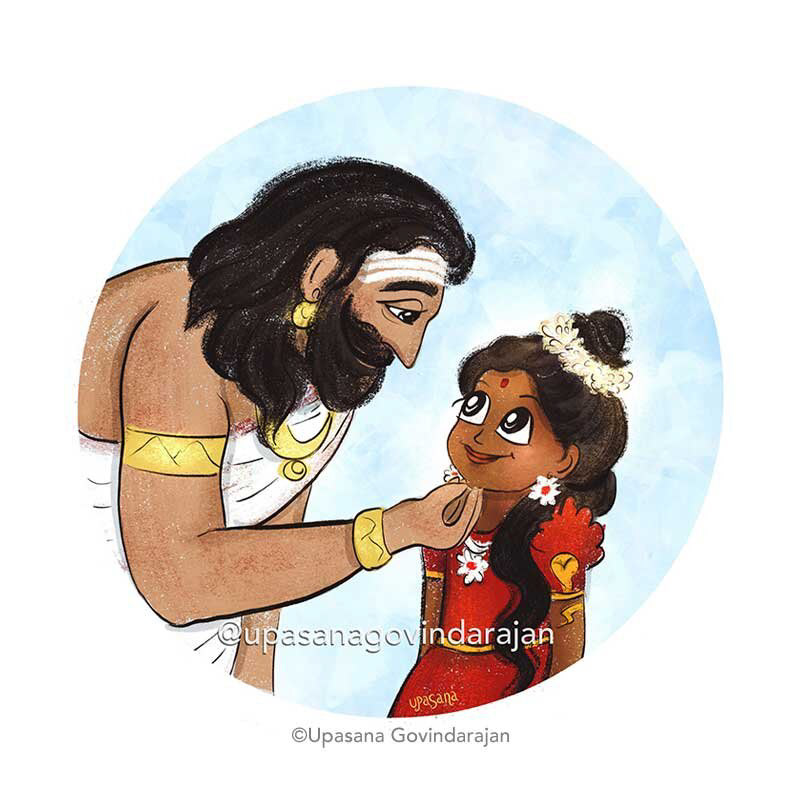 1. PARVATI
Parvati, daughter of the Mountain.
In the 67th verse of the Soundarya Lahari, Adi Shankara wonders how the beauty of the Mother’s chin can be described.. the chin that was caressed by the fingertips of Her father Himavaan, when She was a little girl 😊❤️ 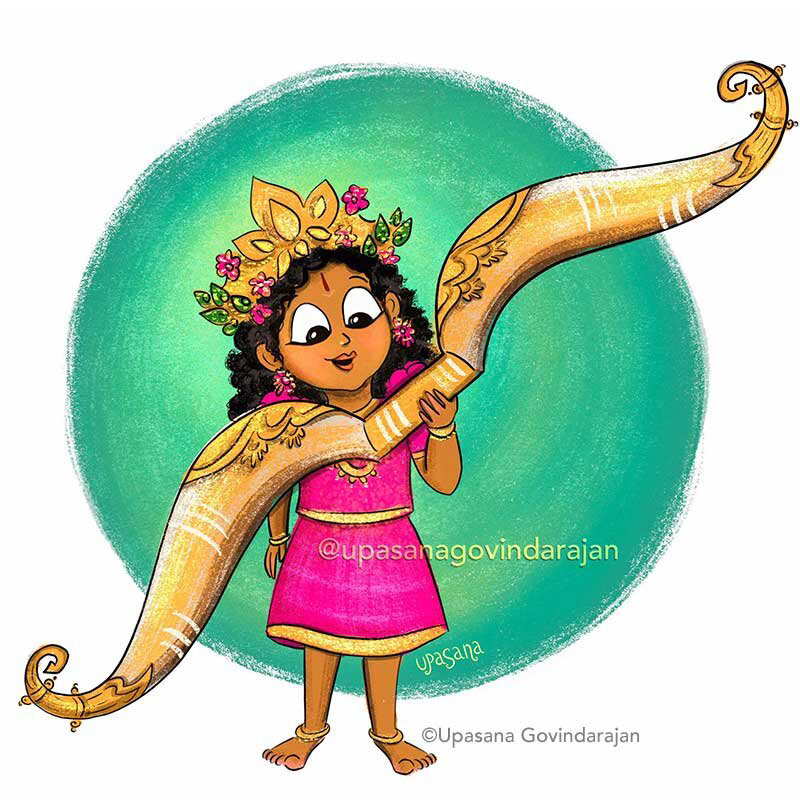 2. SITA
Sita as Janaki, daughter of Janaka
Sita lifts the Shiva-Dhanush that was in King Janaka’s possession.
The Shiva Dhanush was passed down to Siradhwaja Janaka, Sita’s father, over generations. It was so huge and heavy it needed the strength of five thousand men to drag it to the court where Rama would later break it.
But Sita, even as a child, could lift it so easily. For her, it was light as a feather! How could it be difficult for the JaganMata :) When Siradhwaja Janaka saw her holding it with one hand, he knew he would get her married only to a man of “equal” strength and valor and of course, divinity. And when he found such a man in Rama, it was Sita kalyana vaibhOgamE 😊🙏🏽 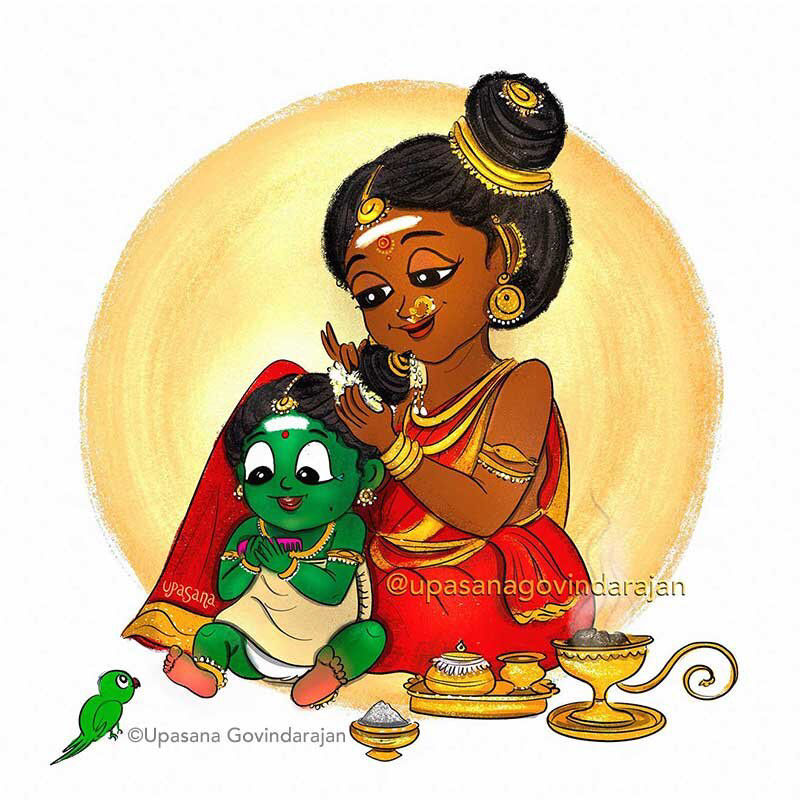 3. MEENAKSHI
Angayarkanni / Meenakshi.
“Kanchanamaalai puthalvi maharagni” #DeviNeeyeThunai.
Angayarkanni, the fish-eyed daughter of Kanchanamala and Malayadhwaja, queen and king of the Pandia Kingdom.
Tamil Poet and ascetic Kumaraguruparar sang about Meenakshi’s childhood in his work “Meenakshi Ammai Pillai Tamizh”.
Pandi-Perundevi, the Queen Kanchanamala of the Pandia kingdom bathes her divine child, little Meenakshi, applies face powder, does her hair in a bun, decorates it with flowers, smears her little forehead with sacred ash vibhuti adorns her with a pearl nethi-chutti and gold earrings.
“Crawling Meenakshi, pretty as a parrot, shower your grace upon us!” 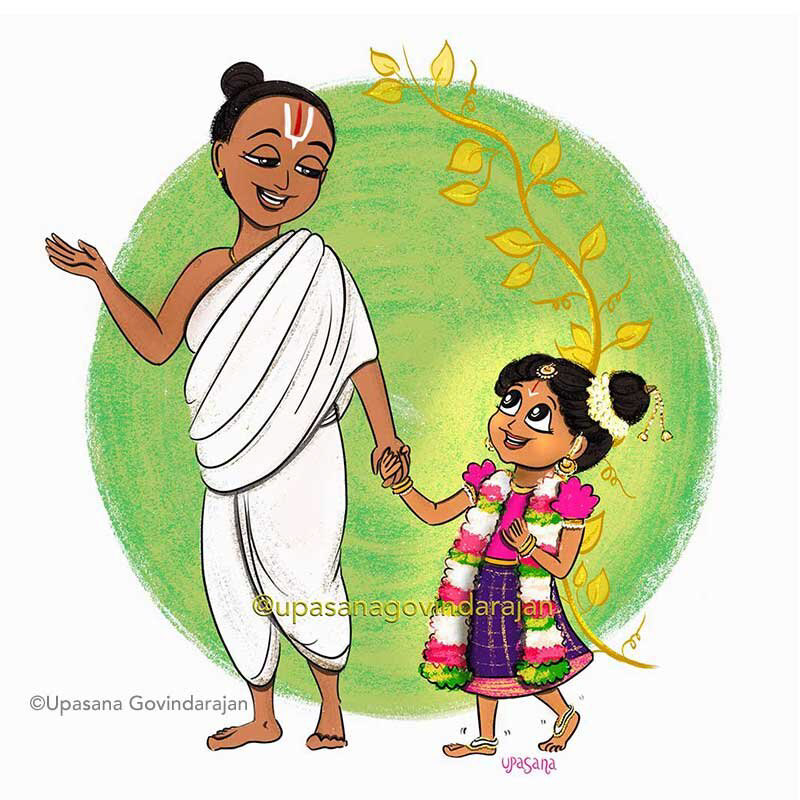 4. KODHAI
Bhattarpiraan Kodhai, Andal as daughter of Vishnuchitta (Periyazhwar)
Sri Vishnuchitta Kula Nandana Kalpavallim
Srirangaraja Harichandana yoga drushyaam
Sakshaat Kshamam karunaya kamalamivanyaam
Godhaam ananya sharanah sharanam prapadye 🙏🏽
- Godha Stuti
Vishnuchitta’s daughter Godha (Kodhai in Tamil) described as the golden kalpaka creeper found in the garden of Vishnuchitta’s clan (not lineage, but the assembly of Vishnu devotees- truly “Vishnu-chittas” ☺️) entwined around the Harichandana tree that is the Lord Vishnu Himself, by Swami Vedanta Desikan.
The father-daughter bond of VishNuchitta and Kodhai is very special. She loves to identify herself as “Bhattarpiraan Kodhai”, daughter of Vishnuchitta at every given opportunity :) most famously in the 30th pasuram of the #Thiruppavai.
She reveres her father as acharya as well, the one who illuminates the path to the Lord. Also depicted here - It is said that Vatapatrashayi Perumal, the lord of Srivilliputtur would recognize the sound of Kodhai’s anklets as she walked to the temple and eagerly await her arrival and of course, her garland! 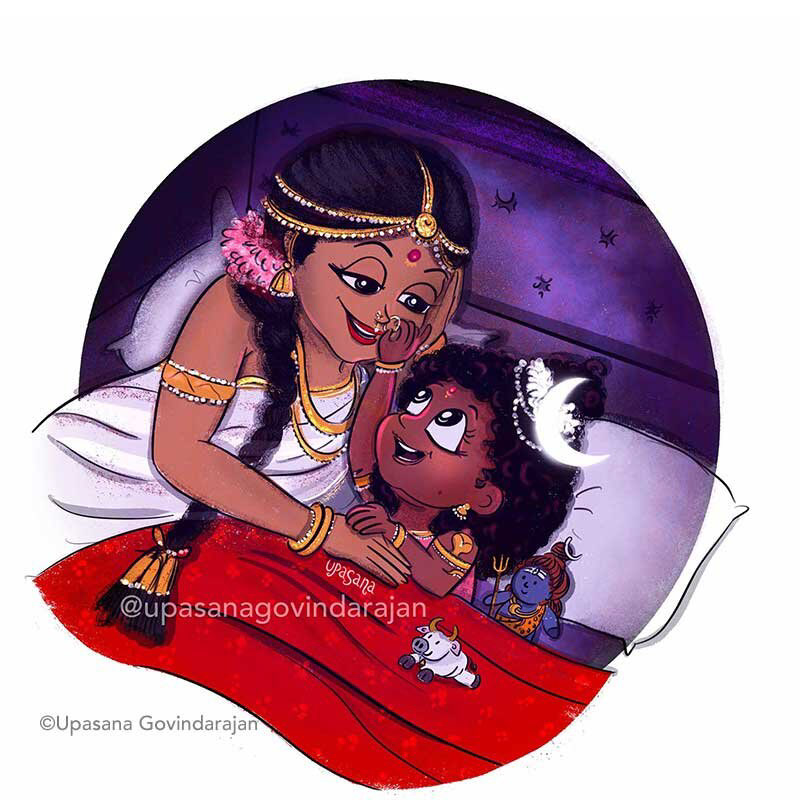 5. UMA
Parvati as “Uma” with her mother Menavati.
The inspiration behind this piece is a lullaby composed for the Goddess Thiru Nilai Nayaki of Sirkazhi, by Kaviyarasar Ku.Natesa Gounder. How did I come to know of this poem ? It was sung by Vidushi Gayatri Venkataraghavan at a concert, preceding it with a beautiful explanation. Pranams and gratitude to her for giving the world this gem. My heart melted as she sang it and I knew I had to draw it sometime ! And here it is today :) If you want to listen to it, please look for her Margazhi Maha Utsavam concert on YouTube RagaMalika TV, episode 16, watch from 23:00 for this particular piece.
https://www.youtube.com/watch?v=Myn0dDJyc60?t=1380
Thiru Nilai Nayaki is the one with a firm resolve to attain lord Shiva. She got the name Uma, from her mother Menavati, wife of Himavaan, who was troubled to see her daughter putting herself through so much in doing penance. It roughly translates to “don’t go”. Another meaning of the name is that she never lets go of her devotees, always watches over them. Perhaps this is why she refuses to close her eyes and sleep :)
The poet imagines the mother singing the lullaby to her daughter Uma. You might be Madhuravakeeshwari, the goddess of nectarine speech, but it would help if you could become Mookeshwari tonight, stop your sweet babbling, just for the night, because you have to sleep! 🙂You are praised as Meenakshi, with eyes like fish that don’t close their eyes. Is that why you won’t, either ? 😄 Well, we also call you Padmavizhiyaal , the one with eyes like the lotus that closes at night and blooms in the morning ! Why don’t you do just the same ? ... O Mother, who nursed Thirugnanasambandar with your milk of gnana, sleep a little while, my darling Uma, Thaalelo ❤️ 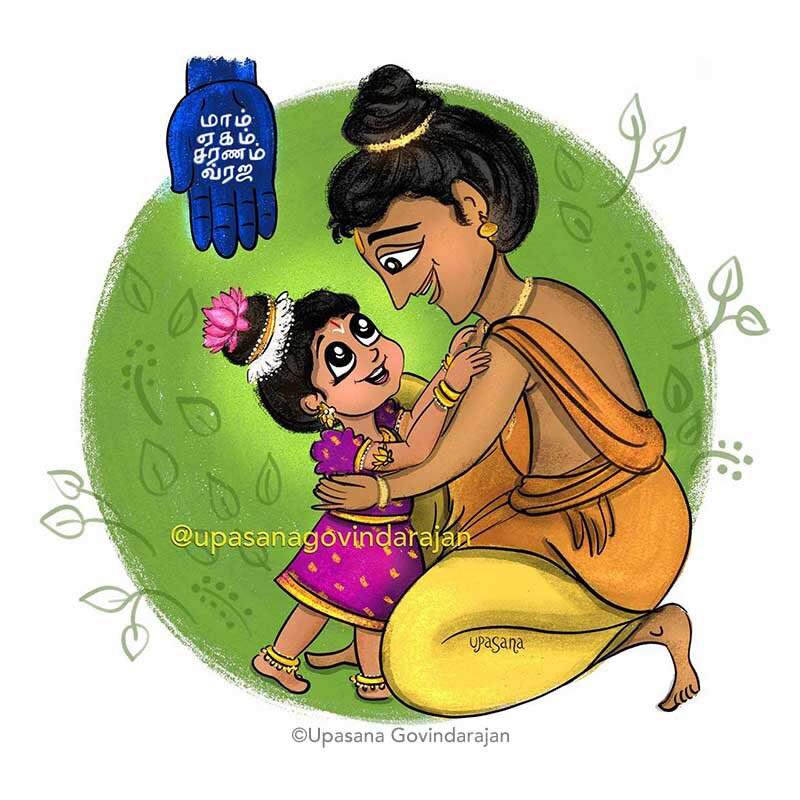 6. BHUMI DEVI
Bhumi Devi, daughter of Markandeya
The great rishi Markandeya, traveled across Bharatavarsha and was particularly captivated by the beauty of Tulasivanam, near present day Kumbakonam. He did penance there with a wish for Mahalakshmi Herself to be born as a child to Him.
The abundance of grace that She is, She appeared as a two year old little girl to the rishi. He was surprised to find such a small girl in the middle of the forest and asked her who she was and how she got there and who her parents were. She replied innocently (not 😂) “I don’t know why or how I got here. You are my father and mother” and jumped on to the Rishi’s lap! Overcome with joy, the surprised rishi embraced her and named her Bhuma, in honor of the beautiful natural surroundings she was discovered in. He raised her lovingly and provided her with all comforts despite living a rishi’s life himself.
One fine day, a very old man approached the rishi and asked for Bhuma’s hand in marriage so that he could lead the remainder of his life as a husband, as per dharma. The rishi was shocked. It just didn’t seem right. So he gave all sorts of excuses including that Bhuma being just a child, didn’t know how to cook and even if she tried, she might forget to season the food with salt. How would this old man live on such food ? Unperturbed by this excuse, the old man declared he would rather live on saltless food than not marry Bhuma. Sensing something strange was going on, the rishi prayed to Sriman Narayana to remove the curtain of maya and save him from the fix. When he opened his eyes, in front of him stood not the old man, but the Lord Himself. Rishi Markandeya understood this was after all divine play and arranged for the wedding of his little Bhuma and Sriman Narayana, who is exalted in the divya Kshetram of Thiruvinnagar where Tulasivanam once was, as “Oppiliappan “because He is equal to none and “Uppiliappan “ because He would rather eat saltless food than be separated from His beloved.
All of this would have not been possible without the grace of the Mother, who showered Rishi Markandeya with spiritual wealth by being his daughter. 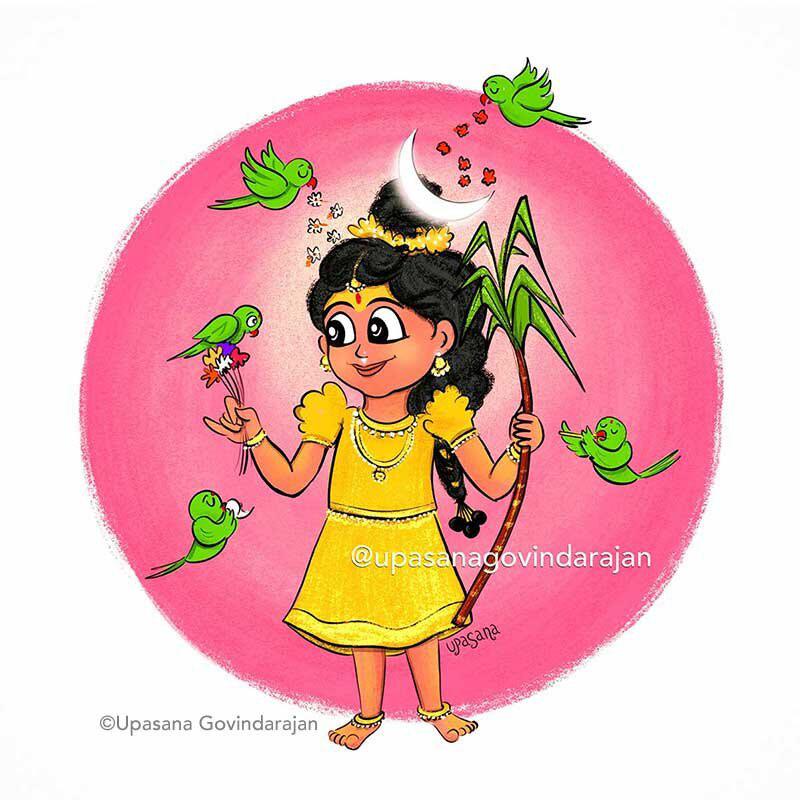 7. KAMAKSHI
Devi arrived at Kanchi through a tunnel from near Kailasha after killing Bandhakasura and took the form of a five-year-old. She was dressed in yellow. The devas were already there in the guise of parrots, fearing Bandhakasura and were praying to the Mother to save them from him. When the Little Devi arrived, she was praised by the Devas who showered flowers on her, played divine musical instruments. She instructed them to bury Bandhakasura’s body near the cave from which she emerged and also asked them to build a Gayatri Mandapam. The devas performed puja for the Kanya rupa of Devi who sat in the Mandapam and shut the door at night. The next day, when the arrived, they saw Sri Lalita Tripurasundari in all her glory who manifested in Kanchi as Kamakshi. 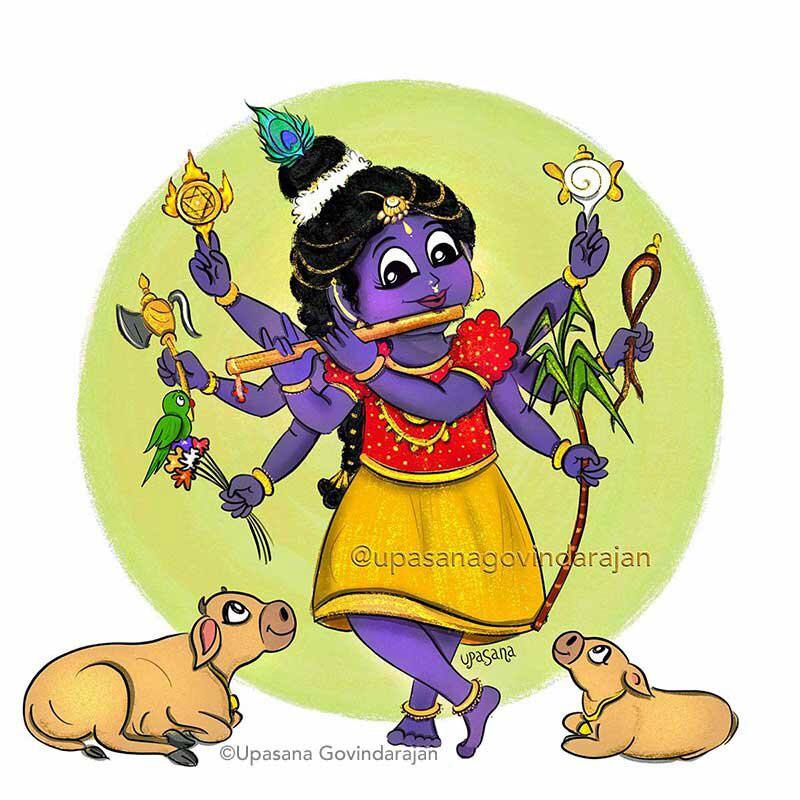 8. BALA GOPALA SUNDARI
Bala Gopala Sundari
Gopala Sundari is a unique combination of Lalita Tripurasundari and Krishna.
Mannargudi Sri Rajagopala Swamy stands atop the Sri chakra and hence goes by the divine name “Sri Vidya Rajagopala”. He is even dressed as Madana Gopala Sundari during utsavam to honor the feminine aspect in Him. Leelashuka or Vilvamangalam Swami in his Krishna Karnamritam, worships Krishna as a little girl ! He refers to her as Lakshmi born into Yadava clan, adorning a peacock feather in her hair! In another verse, he describes Krishna as holding the shankha-chakra, sugarcane bow, flower-arrows, goad, noose, well, just like Lalita Tripurasundari does !
Even in the Lalita Sahasranamam, Lalita is praised as “Goptri” and “Govindarupini”. The word “Go” which means “cow”, also means life. So She is the Protector of Life, like Krishna/Vishnu. And when she protects, she takes the form of Govindarupini.
So one can see Lalita in Krishna and Krishna in Lalita. Isn’t this a beautiful union of Shakta and Vaishnava traditions?
Either way, Krishna has somehow sneaked into Navaratri 😁 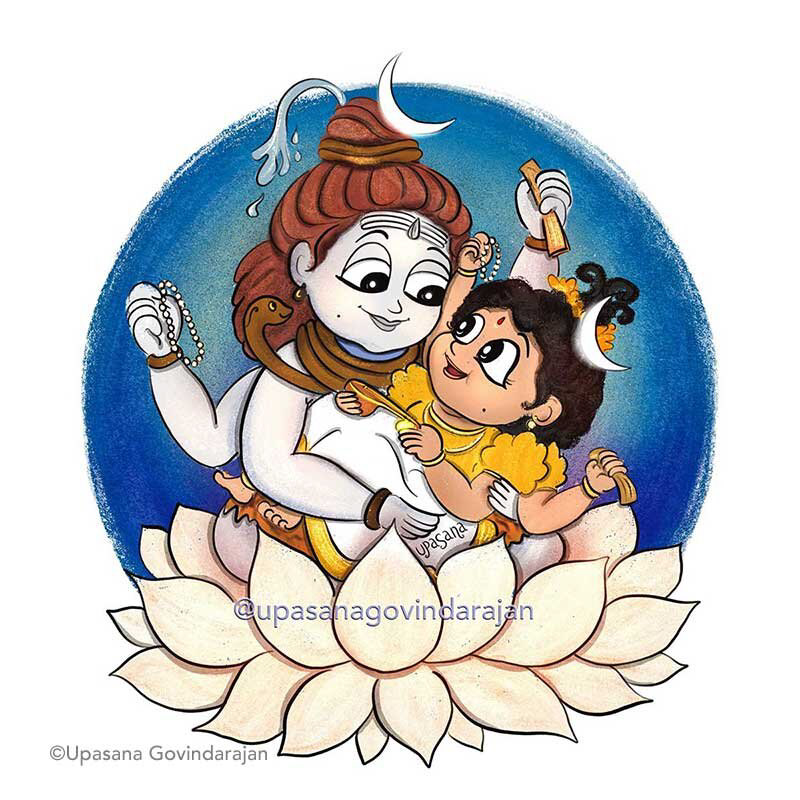 9. BALA SARASWATI
Saraswati as Shivaanuja - Sister of Shiva.
One of the names of Saraswati as found in the Saraswati Ashtotram is Shivaanuja, sister of Shiva. The Dakshinamurty form of Shiva bestows knowledge upon one, as does Saraswati. Both of them are Shuddha sattva swarupam, represent purity and knowledge. This is an imagination of their bond as they are seated on a white lotus representing sattva. Of course in Bala rupa ❤️. 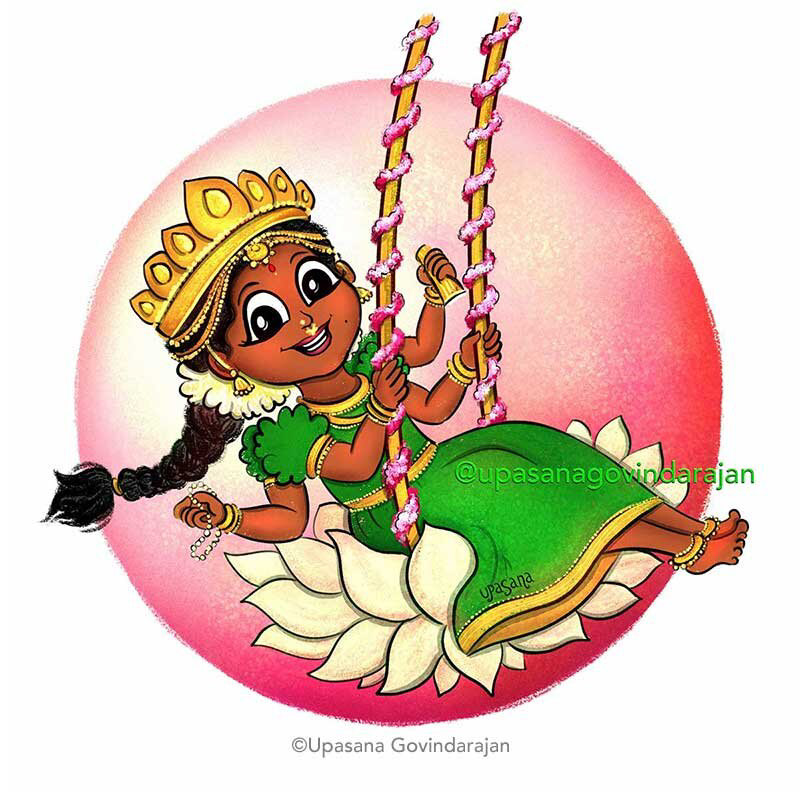 10. BALA TRIPURA SUNDARI
Bala Tripura Sundari.
She makes an appearance in the Lalitopakhyanam as a nine-year old child who rose from Lalita Tripurasundari, to vanquish the sons of Bhandasura.
While it is a common understanding that Bala is the daughter of Lalita Tripurasundari, it is also that she IS Lalita in Bala rupa. Is she not “Bala Leela Vinodini” as praised in the Lalita Sahasranamam. Bala is the child in Lalita’s heart. For Bala, everything is Leela. When everything is play, there is only joy. May we connect with the child in our hearts, offer ourselves to divine play and find only joy!
This series is also my offering for children, young lives - may we always see the divine in you as we see the child in the divine. ❤️🙏🏽 And when we do, perhaps we will finally stop seeing headlines about violence against children and the world will be a safer place.
Back to blog